We bet you’ve come across at least one or two apps where you couldn’t easily figure out how to navigate through them.

What did you end up doing with the apps that failed to give a good user experience?

You, probably, deleted them or threw them in your app graveyard!

So, does everyone else!

And, you definitely don’t want to develop an app that people end up deleting, or worse, ignore.

There are usually 2 reasons an app fails in this respect:

What should you do?

Unless the app succeeds in directing its users, easily, to the features they want to access – how great your app looks won’t matter in the least.

Get the best designers working on your app!

Why Bottom Navigation has become so important?

In a study done by Steven Hoober not so long ago, he found that 49% of smartphone users prefer a single-handed grip while using their phone. Be it for calling someone, texting them, browsing the internet or mostly importantly (for us!) using an app!

When a greater percentage of your users rely on using just their thumb to navigate through the app, naturally, their reach across the mobile screen will be limited. Take a look at this amazingly helpful graphic that shows exactly how far users, women and men, can reach with their thumbs on different devices: 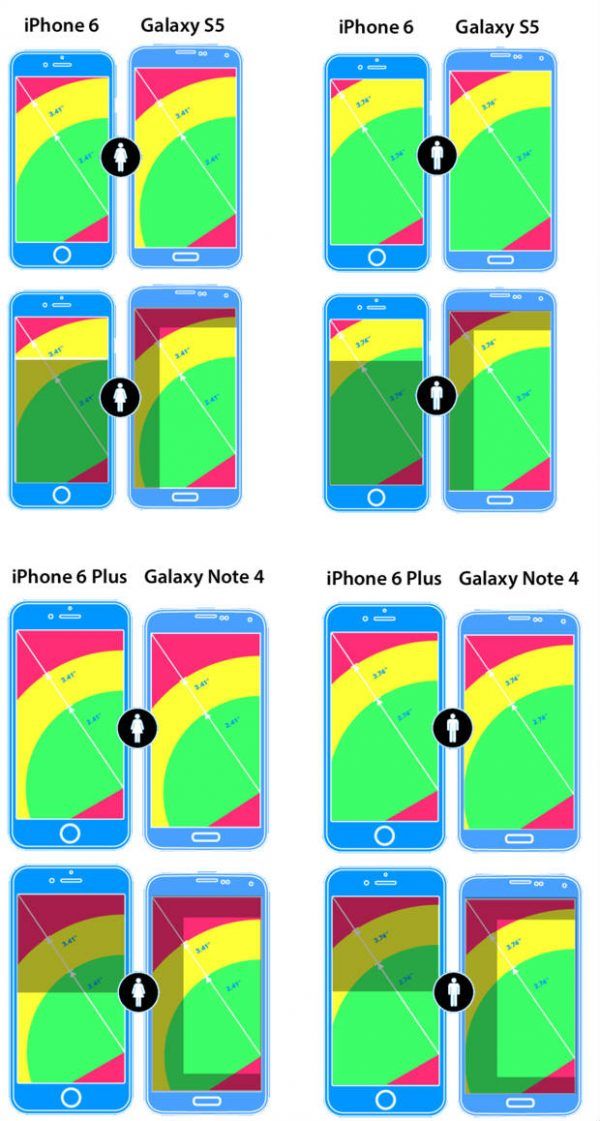 Yellow: areas that can be reached, with difficulty, by stretching the thumb

Red: areas that can’t be reached.

With such a limited space to work with, app features need to be placed in a position where they are easily accessible by the users. And, as the graphic shows, the most easily accessible portion of the screen is the “bottom”.

Thus, the emphasis on the Bottom Navigation for an app!

Apple apps have long been using the bottom navigation or the tab bar for placing the most important app features at an easily accessible location. The best case where an app enhances its user experience by leaps and bounds by using a tab bar is Facebook’s iOS app.

Now, even Google recognizes the important role bottom navigation plays in enhancing the user experience. It recently updated its design guidelines wherein it advises developers to place (what it’s dubbing) a “bottom navigation bar” to navigate through different sections of their apps.

Navigation is the vehicle that lets your users get from point A to point B, with ease. In that respect, bottom navigation should let users get to the most important, or most used, features of the app, instantly. This way, the users can access these destinations from wherever they are in the app.

How to design the best bottom navigation, you ask? Simply follow these 3 rules.

1. Display the Most Important Destinations

Make sure to use only 3-5 top priority destinations in the bottom navigation. Using more than 5 will leave you cramped for space, the tap targets will be very close to each other – and the users might end up tapping the wrong tab, which will only add to their frustrations with your UX.

Not to mention, every additional tab only increases the complexity of your app, compromising its performance.

If your app contains more than 5 important destinations, consider using a Google-like hamburger icon or place them at other easily accessible locations.

b) Don’t Use a Scrollable Navigation Bar

It’s easy to think using a bottom navigation bar that’s lets users scroll through all the important destination is your solution (if you have more than 5). But, it’s not!

More often than not, users don’t realize the navigation bar has the option to scroll and never see the features that side of the screen.

Read Also: How We Have Designed an eCommerce App that Loved by Thousands

Failing to effectively show the users where in the app they are, is perhaps the biggest red flags in an app’s UX.

Use universal icons for indicating a feature. For example, use the icon of an envelope to denote the messaging feature. If your features don’t have universal icons, use labels or text under them for ease of identification.

Use different color schemes to show which tab is active right now, so the user knows where in the app they are. But, make sure not to use conflicting or confusing color schemes, use different hues of the same color used throughout the app.

If there’s a new notification or update on any of the bottom bar navigation tabs, use badges to bring them to the user’s attention.

When a user taps on a tab, it should take him directly to the feature it denotes, not to a pop up menu. It should take the user to the targeted destination.

Furthermore, you should try to deliver a consistent experience throughout – no matter what the orientation, screen size or device the app is being used on.

The bottom navigational bar should be designed in such a way that its:

Making it easier for users to navigate through the app should be the highest priority for an app’s design.

The easier your app is to use, the more likely it’ll be used.

To make it easier for yourself, always ask yourself “what would I like if I were in my user’s shoes?”

Design collaboration: The most effective approach for creating products with top-notch design