MongoDB Vs MySQL: Which Database You Should Choose for your Business?

MongoDB Vs MySQL: Which Database You Should Choose for your Business?

Choosing the database for modern apps has been a massive challenge for many. Especially after the advent of relational DBMSs like PostgreSQL, MS SQL, and MySQL that have been dominant in the recent past. 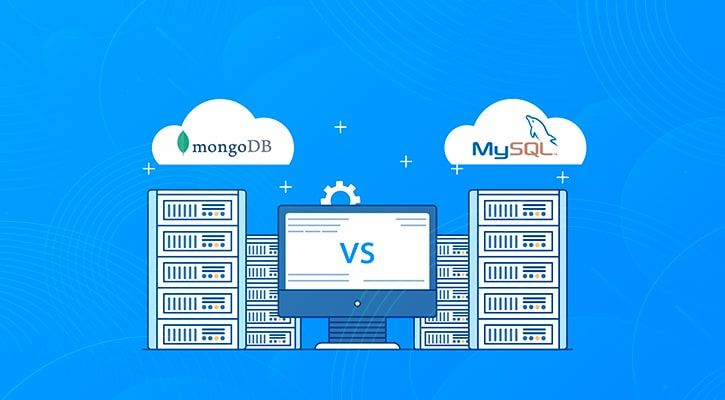 The advent of the new non-relational database has given rise to the competition between MongoDB and MySQL.

This competition makes it difficult for entrepreneurs to choose between the two. But don’t worry as in this blog, we will compare both the databases based on several factors that will provide you insights as to which database is better.

Moreover, we will tell you when to use MongoDB or MySQL.

So, without further ado, let’s start.

MySQL is an open-source relational database management system which is currently owned by Oracle corporation. However, it was built by MySQL AB. MySQL is a veteran as it has been in the IT scene since 1995.

Like other relational DBMSs, MySQL uses SQL (structural query language) to get the database’s access along with keeping data stored in tables. In MySQL, the user can pre-define the database scheme based on the requirements to establish rules that can govern the relationship among all the relevant fields in the tables.

The migration procedure is essential for making any changes in the schema which can harm the performance of application significantly. Moreover, it can push the database to the offline mode.

Let’s see some of the big names that use MySQL

MongoDB is a well-known non-relational database that was developed by MongoDB Inc. Its idea was incepted in 2007; however, the first version was released in 2010. In this type of DBMS, the data is stored in the form known as BSON.

The MongoDB query language is generally used to store related data for query access. In this, the fields are different for each document, and you won’t need to require to declare the document structure to the systems.

It allows you to create and add a new field to the document without making any alterations in other documents that are present in the collection. In MongoDB, you don’t need to take the system to the offline mode as the central system catalog doesn’t require any update. Moreover, you can also enforce the data control on all the collections by optionally using the schema validation.

Read More: Choose MEAN stack development for your next project

MongoDB’s document data model naturally maps the objects in the application mode. Due to this, developers find MongoDB simpler to master and utilize. The users can also store arrays without any hassles by representing the hierarchical associations.

Moreover, this NoSQL solution comes with added benefits of on-board replication and auto-sharding embedding that enhances the availability and scalability.

MongoDB is used by many successful organizations such as:

Whereas, in the MongoDB database, the data is stored in JSON-like documents that come in varied structures. To boost up the query speed, it stores the related data sets together. These sets are then accessed by using the MongoDB query language.

The database is schema-free, which means that the mobile app developers don’t have to define any document structures for creating the documents.

Both the databases MySQL and MongoDB uses indexes for the task of searching data. However, the difference comes in the approach, when an index is not defined or found.

When the index is not defined in the case of MySQL index optimization, the database engines scan the entire table to find relevant rows.

Whereas in MongoDB, when the index is not found then each single document in the collection is scanned so that the document offering a match to the query statement could be selected.

The databases for MongoDB are written in C, C++, and JavaScript. It has binaries for Solaris, OS X, Windows, and Linux.

Databases for MySQL support master-slave replication and master-master replication. With this multi-source replication, you can replicate multiple masters in parallel.

On the other hand, MongoDB supports auto-elections, built-in replication, and sharding. Developers can use auto-elections to set a secondary database that will automatically overtake on the failure of the primary database. Whereas, sharding allows horizontal scaling which is considered difficult to implement with MySQL.

MongoDB vs MySQL: What they offer?

Oracle offers lifetime support at three of the below primary levels for MySQL:

Talking MongoDB, it provides enterprise-grade support. This support extends beyond the fix/break model. It provides you with an extended lifecycle support add-on along with round the clock support. This gives the user flexibility to upgrade to a newer version at their own pace.

MongoDB vs MySQL: Speed and Performance

MongoDB is known for better controlling large volumes of unrestricted data as compared to that of MySQL. It’s because it stores the entity data on a single document. Moreover, it allows the users to query in a sensitive way to workload. It also allows the user to read and write data in one place.

MySQL is considerably slower as compared to MongoDB when you use large volumes of data. MySQL struggles to deal with the high volumes of unstructured data. It’s because the data is spread across multiple tables that need to be accessed for writing and reading the data.

The major security features in MongoDB include auditing & authentication and authorization. Users also find it feasible to use transport layer security (TLS) and secure sockets layer (SSL) for encryption of ends. Moreover, it also ensures that the documents can only be read by the intended clients. MongoDB is also known for establishing control over variable sets of privileges.

In MySQL, the security model used is based on privilege. This means that a user authenticated by MySQL can benefit a database like INSERT, UPDATE, SELECT, and CREATE.

When we compare MongoDB with MySQL on the grounds of performance, MongoDB seems to have an advantage.

MySQL uses a rigid table structure model which makes it slower for users to create an application in it.

On the other hand, MongoDB speeds up the development cycle by about 4 to 5 times by merely working with data that has the flexibility of the JSON documents.

MySQL, which is one of the most popular databases, supports atomic transactions. It means that you can perform multiple operations inside a transaction.

On the other hand, MongoDB added support for multi-document transactions in its 4.0 version. This step made MongoDB a robust open-source database in the unstructured space. However, there are still some limitations present when it comes to unstoppable operations. Even after all this, the database is still a massive boon for the MongoDB Developer community.

On the other hand, the MongoDB architecture is entirely developed on the distributed architecture. Due to which it offers data localization with the assistance of replica sets and automatic sharding which also maintains an ‘always-on’ availability.

This is the reason why it’s possible to make the data available globally when they are placed locally for governance and latency access.

When to Use MongoDB

When you high data availability is your priority along with automatic, fast, and instant data recovery.

If you’re working with an unstable schema and need to lower the cost of schema migration.

In case your services are mostly cloud-based, MongoDB would come handy for your business due to its native scale-out architecture. Another factor is that this architecture is powered by sharding, which goes with the horizontal scaling and agility offered via cloud computing.

When to Use MySQL

If you’re just starting your business and in which case, the database won’t scale that much.

If you have a data structure which is not going to change over the period.

If you have a fixed schema.

If you’re looking for top-notch performance ability in a lower budget.

If you require a high transaction rate.

If the data security is your top priority.

Should You Use MongoDB Instead of MySQL?

Firms of various size and scale prefer using MongoDB, as it allows them to build applications much quicker. Moreover, it’s also suitable when it comes to dealing with the various types of data. Furthermore, companies can achieve higher efficiencies at application management.

Using MongoDB automatically eliminates the complicated ORM (object-relational mapping) layer. This assists in the translation of objects in the relational tables. With MongoDB, you get a flexible data model that allows you to adjust the database schema as per your business needs.

MongoDB can also be scaled across platforms and within the multiple distributed data centres. In this process, they provide availability and scalability, which is superior to that of MySQL.

With deployments growing in terms of data volume, MongoDB can be seamlessly scaled without any downtime.

When it comes to MySQL, the user has to carry out custom engineering tasks in order to achieve scaling with MySQL. Due to all these reasons, many companies have already migrated from MySQL to MongoDB.

I hope this blog helped you to make the right choice between MongoDB and MySQL. If you still have any query, then you can consult our MongoDB Database Specialist and MySQL Developers who will provide you with proper guidance for your project.