Peerbits Pedal for the Cause of Deafblindness

Peerbits Pedal for the Cause of Deafblindness

Life is not always about taking and giving. Most often, yes, but not always. We firmly hold a sense of responsibility towards the society and the doing something selflessly. This belief pushed us to extend our kind support towards the cause of DeafBlindness of children.

We were responsible for supporting the entire event, and we did it the best possible way. Sense India Foundation had organized a bicycle and tricycle run to communicate the message of DeafBlind children. The event ‘Messengers on Cycle’ was held on Sunday, 26th June wherein 8 of our Peers participated in a 16Kms long cycle run, and they all completed the one.

It was early in the morning at 6 AM where all the messengers were gathered at GMDC ground, Ahmedabad as it was the rendezvous point. The event started with the Zumba activity to warm up with followed by the felicitation from our Co-founders Mr. Nasrullah Patel and Mr. Shahid Mansuri.

The Zumba dance did help a lot of us to wake ourselves up on Sunday morning and at the same time it was a good exercise too. More than 400 participants were Pedaling as a messenger to communicate the message of DeafBlinds. 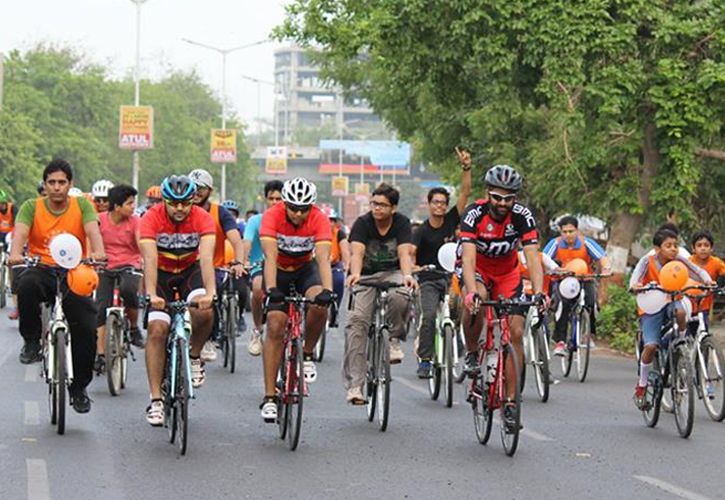 The first eight kilometers were without any stoppages where everyone enjoyed the early morning breeze and sweating out the idle thoughts of lazy Sunday. However, soon after completing the half way, the troop stopped to take a rest for a while.

A little bit of breather did no harm as messengers were again on the road to finish rest of the 8 Kilometers. The things went pretty easy till the first 8, but later on, legs started to feel a bit heavy as other 8 Kilometers looked a little far.

However, seeing the people around, the cause for which we were Pedaling for, pushed us. All the eight riders of Peerbits were successful in completing the event of 16 kilometers long cycle run. It was followed by the breakfast and a concluding ceremony.

We all had much fun while we also stuck close to the cause we were burning our calories for. Out and out it was a pleasureful experience for the Peers. It makes us feel good at the end of the day that we completed what we intend to.

Moreover, this is an inherent virtue which we hold too close to us even while we are at work. The event completed successfully and left a mark of an incredible memory in all of us.

We hope to contribute our best to this cause and others as well because it pushes us to work more and do more things for the reasons that matter.

Peerbits Celebrating 11 Years of Success: Glimpse of One Day Outing at 100 Acres

The Essentials for Making a Great App