Why you must choose MEAN stack development for your next project?

Why you must choose MEAN stack development for your next project?

There’s no denying that 21st century is indeed a digital era. And to build an application in this era and that too from the scratch you need a software stack that is both standardized and consistent.

To create a robust backend, you need a set of tools that are designed to reduce the development time and to streamline resources.

However, in the current scenario, there is a of abundance of software stack like LAMP, Ruby on Rails, and many other. This abundance has made the stack field crowded.

That’s why nowadays, many developers are using a combination of technologies to get better and faster results for mobile and web app development.

MEAN stack is the prime example for that kind of a technology. In this article we’ll see what MEAN stack is, why one must learn it, how does it work and what are its advantages.

MEAN which is an abbreviation of MongoDB, Express.js, Angular.js, and Node.js is a collection of user-friendly full-stack JavaScript frameworks. These frameworks are suitable for building dynamic applications and websites.

It’s an open-source stack for developers for swift and organized method that builds prototypes of MEAN-based web applications.

One major advantage that MEAN stack provides is the language. JavaScript is a single language that runs on every tier of the application.

This helps in a great deal to make the approach to web & app development more efficient and modern.

You can hardly achieve much on the web without JavaScript. Being the single language that runs the entire MEAN stack, it immensely boasts the communities of active developers.

Since everything on MEAN programming is written in JavaScript, it facilitates unique execution environment for server-side and client-side.

The demand of MEAN stack development has increased due to its versatility of building a web & mobile application that is robust, fast, and maintainable.

Another chief reason to learn MEAN Stack is the employment opportunities that it offers.

Employers are constantly looking for engineers who possess a sound knowledge of JavaScript and MEAN Stack technologies such as: MongoDB, Express.js, Angular.js, and Node.js.

Now let’s get some perspective by comparing these technologies in terms of their growth over the years.

The other web development frameworks competing against these are Rails, Django, and Laravel.

Let’s have a look at the below graph which clearly shows the domination of the MEAN stack web development technologies over the rest. 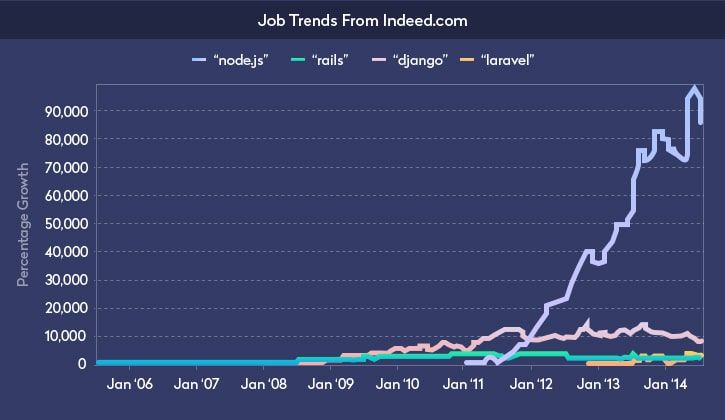 After framework let’s have a look at the databases.

It’s the database that MEAN stack uses. Apart from that it’s the default database for Meteor.js project.

Cassandra, Neo4j, and Couchbase are another rival database. Let’s see the trends for these databases. 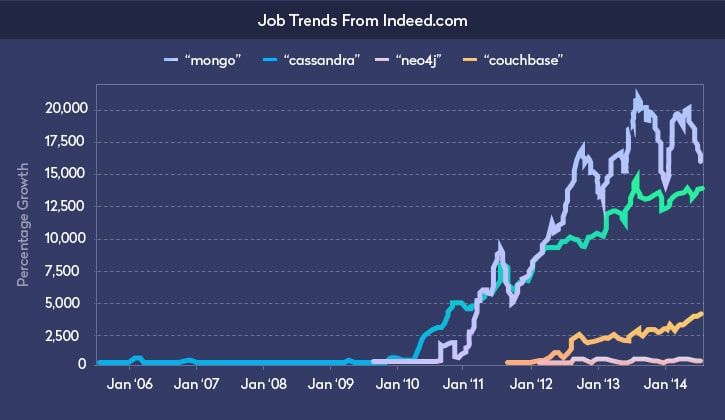 The ‘A’ in MEAN stack stands for Angular.js. React.js, Emberjs, and backbone.js are its rival technologies.

Let’s see the below graph to know growth trends of these technologies. 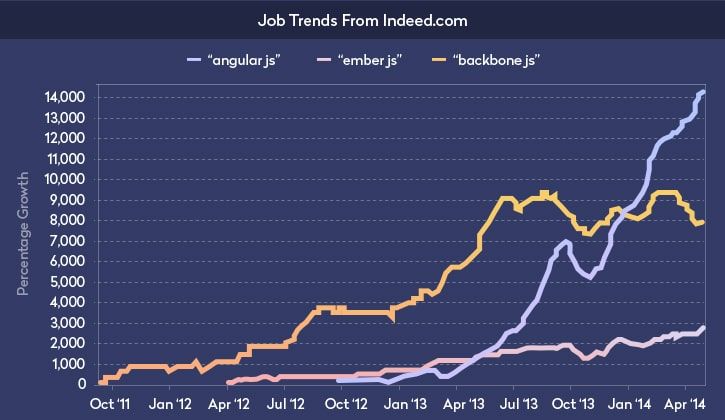 In JavaScript, AngularJS is the client-side language. So, when client makes any request, it first gets processed by the AngularJS.

After that the request enters the Node.js which is the phase 2. It’s also called as a server-side language.

Once the request is made by the ExpressJS, the MongoDB retrieves all the data and returns the response to ExpressJS.

Similarly, the ExpressJS returns the response to Nodejs which ultimately returns it to the AngularJS.

What is the contribution of each component to MEAN?

MongoDB is well-known for its scalability in both performance and in storage. It’s also well-known for foolproof management of massive amounts of data.

MongoDB also facilitates you to add fields to the database without reloading the entire table.

Express.js forms the backend of the MEAN stack. It manages the interactions between the database and the front end. It ensures that the data is transferred smoothly to the end-user.

Express.js has a minimalist approach – it has the potential to handle all the processes efficiently. It’s important to note that the minimalistic nature doesn’t mean featureless.

Express.js also prevents you from overwriting variables. With this you cannot accidentally redefine a variable that you have created previously. This helps in saving a great deal of time and money.

AngularJS is a JavaScript front-end framework which is highly popular. In MEAN stack the Angular JS server is used to develop the user-facing side of the application.

Front end, backend, and database all are built on the JavaScript. Due to which there’s a smooth flow of data among all the parts of the application.

Angular JS is an ideal front-end framework due to its easy-to-use templates and well-tuned performance.

Moreover, you can develop app simultaneously for both mobile and desktop.

In MEAN stack the Node.js acts as a backbone. Express.js is developed specifically to work on top of Node.js.

Node.js has an inbuilt web server, which makes it easier for you to deploy the MongoDB database to the cloud.

Node.js’ USP is its scalability. Moreover, it can support million simultaneous connections.

Node.js is more compatible to work with low-resource requests as compared to resource-intensive resources.

MEAN stack makes the transfer of code written in one framework to another easy.

Nowadays, MEAN stack development companies are exploring new technologies to bring out perfection in the development of applications and websites.

After the completion of app development, the developer can easily test the application on a cloud platform.

MEAN stack is highly flexible as you can 1. Develop, 2. Test, and 3. Introduce the application without any hassles.

Moreover, it also allows you to add extra information once you have added a field to the form. MongoDB provides full cluster support along with automatic replication.

In MEAN stack the requirement of total number of developers is less as compared to LAMP stack.

In LAMP stack you need developers who are proficient in technologies like JavaScript, MySQL, and PHP. So, MEAN stack is a cost-effective method of app development.

MEAN stack development is high in speed and reusable due to the non-blocking architecture of Node.js.

Moreover, with Angular JS, which is an open-source JavaScript framework offers Testability, Reusability, and Maintenance.

MEAN stack uses libraries and public repositories for development process. The overall development cost is also less when you use this technology.

In addition to that MongoDB uses cloud functionalities in the app thus reducing the disk space cost.

The MEAN stack gets updates frequently as its components are open-source.

One obvious advantage of using MEAN stack development is that the complete code for the development takes place in JavaScript.

It includes development from client-side to server-ride. This could well turn out to be a blessing in disguise for the MEAN stack developers who are learning the language from the scratch.

MEAN stack development is easy to learn for anyone whether they are front end developers or backend developers.

It is easy to understand, grasp, and implement during the development.

Node.js has a massive library that has rich variety of JavaScript modules. These modules make the process of web application development with Node.js easy.

MongoDB provides you with a flexible JSON document structure which can be used for data representation. It’s suitable for large sized projects.

JSON is used everywhere in MEAN stack. Angular and Node.js both offer JSON. MongoDB which is a database framework also offers to store all the data in JSON format.

Apart from that JSON is also used by the Express JS. In total MEAN uses JSON everywhere that facilitates the smooth data flow without any rewriting and reformatting to the different layers.

If you want to develop any application or website with MEAN stack technology then you can contact Peerbits.

Developers at Peerbits are exceptional when it comes to MEAN stack technology and possess years of experience.

Full stack developers Vs Specialised Developers. Which developer should you hire?