Why do wallet app startups fail? Mistake to avoid & effective tips to win

Why do wallet app startups fail? Mistake to avoid & effective tips to win

You know what people really want?

They want the freedom of buying anything from anywhere in the world without having to carry cash in their pocket. 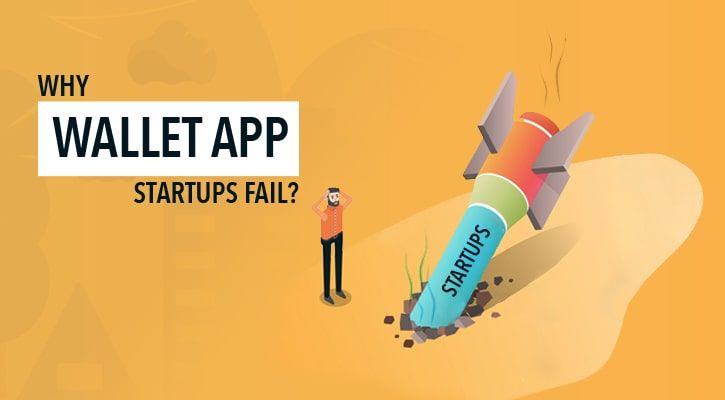 Simply put, They want an omni-present payment solution that would replace their physical wallets and eliminate the need carry country-wise currency in their wallets.

What is a mobile payment app?

Mobile payment app is simply any smartphone application that offers online payment services inside itself. Take Airbnb for example. It links Apple Pay in its iOS app to allow users to pay for their bookings.

What is a digital wallet app?

Digital wallet app, on the other hand, lets users replace everything in their physical wallets such as cash, credit & debit cards, important documents such as driving licence & membership cards, and stores them digitally.

This basically allows users to undertake a multitude of transactions.

The best example of such a wallet app is M-PESA in Kenya and AliPay in China.

And that’s not it! – Wallet apps also saves time by quickly holding smartphone to a payment terminal and verify the purchase in a matter of seconds.

What else? – let’s see. You can also shop online by using a mobile wallet instead of a card, which means you can reduce the number of places where your card details are stored.

Plus, your full card number is never displayed anywhere in a mobile wallet app, meaning those prying eyes won’t be able to capture your card number for future use. This ultimately reduces the chances of fraud.

And the best part? – rewards!

You can still receive your card offers such as cash back or other rewards when you use your card from a mobile wallet app. In fact, most wallet apps have their own reward program where you can get extra discounts or added cash back offers.

So, the question is:

Why most wallet app startups are failing?

It’s the user behavior. Let’s be honest. Most of the time, we humans hate to learn an entirely new behavior.

And you know why? – it’s because users won’t go out of their way to purchase NFC-enabled smartphones unless enough merchants are accepting payments through it.

And Merchants, on the other hand, says they won’t invest in such terminal hardware unless there are enough customers start using them.

Do you see the problem? – Both sides of the network need to change their behavior, but neither of them is ready to take the first step.

Simply put, introducing an entirely new behavior mostly leads to barrier in adoption, and this problem is compounded especially when two-sides have to learn new behaviors.

Then what made successful wallet startups a success?

Most successful wallets app did one of two following things:

Now, let’s try and understand this better with examples.

Do you know about Square app? – It’s a mobile app startup that helps millions of sellers run their business with point-of-sale solutions.

Now, do you know why Square become successful? – It’s because Square targeted only one-side exclusively. They did not change anything at the customer-end.

In Square, the customers need to use their credit card just like they always did. What Square did is they changed Merchant side behavior.

But, at the same time, Square also gave merchants a superior and simpler pricing and the convenience of accepting money anywhere, anytime.

Today, in only few short years, Square’s valuation has reached to $3.25 Billion USD and has 600 employees.

Read More: How to build a peer-to-peer payment app

Another example that we would like to talk about today is M-PESA.

M-PESA in Kenya is largely known as one of the most successful wallet apps globally.

Why? – Well, we’ll let the statistics tell you that. 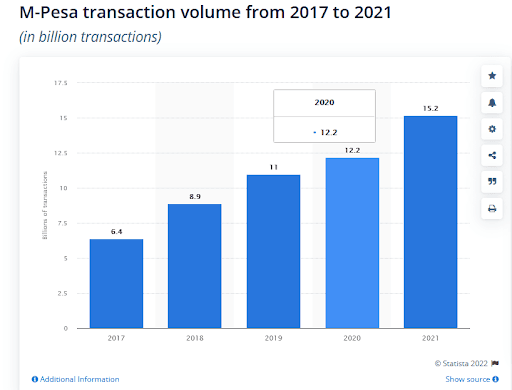 M-PESA achieved this growth by establishing itself as a revolutionary payment system.

You see, in East and North African nations, there is a standard money transfer system called Hawala.

In this system, a user would usually ask a hawala agent to transfer money to a person at some other location, who then contacts a hawala agent of that location to pay user’s acquaintance.

In simple terms, the user pays the sum to a hawala agent at his or her location along with a small fee.

The hawala agent then contacts and instructs to pay the sum to user’s acquaintance. The debt between the two agents is then logged and settled on a later date.

M-PESA digitized this system, without changing behavior at neither end and made it more efficient for both, users and agents by leveraging technology to track movement of money.

All in all, the key takeaway point is this: if you’re building a wallet app and considering changing even one side of the network, make sure to offer significant advantages over the existing platforms.

Square offered better pricing and convenience of accepting payments on the go.

Read More: How Much Does It Cost to Make wallet App?

What it will take for your wallet app to succeed?

Just like we mentioned in the beginning, customers want fewer & omni-present payment solutions with a full wallet content holding capacity and a good value proposition.

That means, your wallet app solution needs to provide added-value benefits, should be easy-to-use, provide awesome customer experience, and must be customized to meet the specific local needs.

Also, remember that the mobile wallets that require more time and effort than pulling out credit cards from a physical wallet are less likely to succeed.

That means, your digital wallet app solution needs to offer a range of services that would enable them to become part of your users’ lives and it also must be interoperable across border.

Successful wallet apps like M-PESA, AliPay, Square, etc. all did the same. These startups delivered integrated wallet solutions that were designed specifically for a targeted local market, which eventually made them an attractive, modern solution than the traditional financial institutions.

What’s clear from all these success stories of Wallet App Startups is that simply offering common services is not enough.

Success will only be achieved if you develop a consumer-focused services wallet which solves some specific problems and is tailored for a specific market.

Therefore, make sure to keep these lessons in mind before you take the first step towards building your own digital wallet app. And if you need any help figuring it out, just let us know!

NFC in mobile apps is revolutionizing the payment system

What are Venmo & Square Cash? How can you build a P2P app like that?