API testing is one of the most complex yet significant steps in software development as a part of QA testing. There are many benefits of API testing since those can be sophisticated and they frequently depend on protocols and standards that are hard to find in other forms of testing. 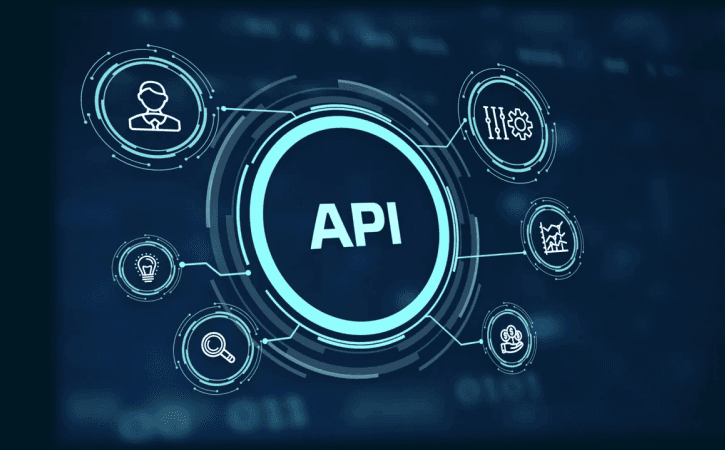 While developers prefer to test just the core functionality they are working on, QA testers need to adopt API testing methodology to evaluate functionality, API performance tests, and API security tests. They check whether all components operate together from end to end.

To begin an API testing process, it is essential to have a clear knowledge of API testing methodologies’ scope and purpose.

Here are some basic questions to consider before starting any API tests.

Once you have proper answers to the questions mentioned above, you can start adopting different testing approaches. The API testing in software development should also be tested to determine what situations or variables testers can assess and whether a certain system works properly and reacts appropriately? This is where test cases come in.

After that, to drive the advantages of API testing, you can conduct tests and compare their predicted outcomes with their actual outcomes.

Your tests should analyze the following response: 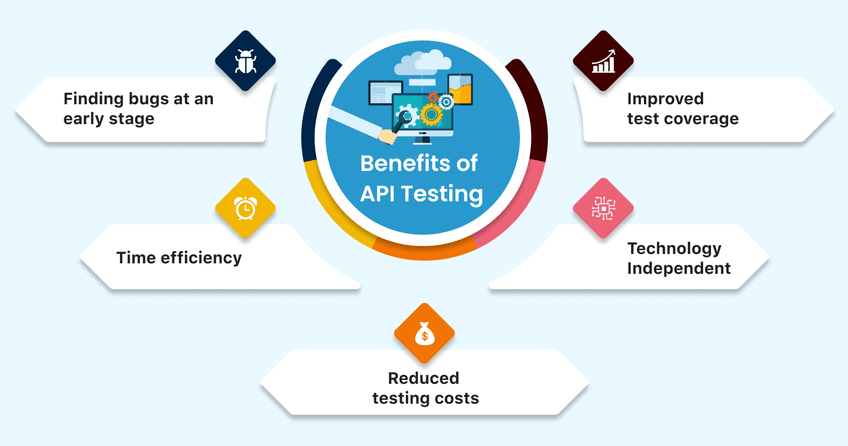 Finding bugs at an early stage of software development

It is possible to test APIs without a user interface. That is, they may perform tests without testing the full software. This means a developer can detect different types of bugs early in API testing before those errors affect GUI.

The benefit of such API testing is that the businesses opting for QA services save time and money.

Effective use of time

One of the advantages of API testing is that it takes less time than functional GUI testing, as the latter involves polling of web page components which takes much time.

If you want to know how much time API testing can save by testing the core functionality of your application, then here is a quick comparison.

You should expect similar time reductions for your QA UI testing team. Choosing from the range of API testing methodologies ensures better and quicker test coverage than automated GUI tests. It is because API test automation requires less code.

The benefit of API testing is that the test automation is quicker and more accurate than GUI test automation, resulting in fewer hours and reducing the cost of software testing.

Your API testing methods involve exchanging data in XML or JSON formats. This data transport method is independent of application language, enabling QA engineers to use any programming language that offers these technologies to automate API testing, including PHP, Ruby, Java, JavaScript, and more.

An automated API test may cover a far wider range of functionality than unit tests constrained to only functional components within a particular application. This is where the majority of issues emerge.

Tests at the API level, on the other hand, are aimed at ensuring that all system components work as intended. The benefit of such API testing is that it helps improve the program’s overall quality and contributes to improved user experiences.

Top Tools for the API Testing

When it comes to API testing, there are multiple API testing methods and, similarly, an array of API testing tools depending on your testing requirements, budget, and technology.

Here are some of the top API testing tools you may consider before running any API tests.

Initially, Postman was a Google Chrome extension. Postman API testing tool service is now available on both Windows and Mac, providing a great option for exploratory and manual testing.

You can use the Postman REST API testing tool for API testing set up for automated tests and troubleshoot the same.

Thanks to this free and open-source Java Domain-Specific Language, testing REST services has never been easier. You can run validation and verification of the responses to these queries using this tool.

When testing RESTful services in Java, you should use Rest-assured API testing. It is a great open-source platform that provides Java domain-specific languages for testing REST services. Also, it is commonly used to test JSON and XML-based applications.

QA experts can rely on Katalon studio to automate API, web, desktop, and mobile testing. This tool simplifies deployment by incorporating all frameworks, ALM connectors, and plugins into a single package for quick deployment.

A few of the key advantages of Katalon studio include its ability to combine UI and API/Web services for several platforms (Windows, Mac OS, and Linux).

This API testing tool is headless, and therefore it can be used to test both SOAP and REST APIs and web services. For this reason, it is frequently chosen by testers as one of the most useful tools for asynchronous testing based on complex scenarios.

Additionally, it is notable for its excellent data-driven testing and user-friendliness.

You may use the Paw tool to inspect and explain the APIs you create or acquire. Calls may be made using the app’s native macOS interface, and it can test server responses, generate client passes, and introduce new APIs.

It’s been a long journey for APIs that began as basic libraries of code that programs could use to operate on the same machine to the more sophisticated remote APIs that let programs on one computer call up programs on another.

Specialty tests abound, and no list could have it all included, but these are the seven major types of API testing that the QA team may use.

The term “unit testing” refers to creating API tests that run with each new version of an application. To pass a build of the program, they should be written near to the code.

How much code coverage does API need depends on its risk level and the functions it provides?

It is important to consider this API testing area because it will support the remainder of the work in the future.

The app’s functioning mostly determines the user experience. How the user feels about your product determines whether or not it’s a success or failure.

As a result of its scope, structure, and constant development, API integration tests are challenging and divisive. On the other hand, the benefits include faster production of higher-quality goods, making it a challenge to take on.

This API performance test aims to examine the program’s reaction time, dependability, speed, and functionality. As a result, this assures maximum efficiency. Specifically, this test aims to eliminate software performance bottlenecks rather than flaws.

This is a non-functional test that helps determine the performance of a software application or product. End-to-end API testing in software development is published in a real-time environment where several users may test it simultaneously.

This is a powerful method to monitor and oversee an app that uses glitch-hunting techniques, such as human or automated testing. Resource leaks, exceptions, and so forth are all examples of this.

The test may provide reliable findings in terms of bug discovery if it is done with the greatest care. You can focus on particular features like monitoring, error detection, execution faults and any probable leaks, these tests are your best shot at uncovering severe flaws.

This test guarantees that the API testing in software development coupled with implementation is protected from external dangers.

Moreover, other procedures like validation of encryption methods and the design of API access control are included in API security testing. In addition, it handles user rights and verifies authorizations.

Validation testing is one of the most critical tests performed at the last stage of product development. It examines the product, behavior, and overall efficiency.

When it comes to API app development, validation testing may be considered a guarantee that the product is being developed correctly.

Read More: Skills a developer must have for successful product development

How to do API Testing?

Testing APIs (application programming interfaces) is done at the message layer without the need for a user interface. When starting the API testing, the QA team uses it to see whether APIs live up to their expectations in terms of functionality, dependability, speed, and security.

Your product architecture API testing should include the following ways to start the API testing.

It is necessary to gather the API’s requirements before testing. You may use API to API comparison or database verification to evaluate input and output data, depending on where and how an API fits into the overall application process.

API integration and API performance tests are impossible without API discovery. When it comes to API discovery, QA engineers need to find the tiniest of elements that make everything work as it should.

At this stage of API discovery, you should figure out the best way to get to API testing in the first place.

Writing good requirements is very hard. Therefore, it needs open communication to define proper requirements as every stakeholder can have useful input on the requirements. Also, they may pose some tough questions that need answering.

This is why teamwork matters — developers, testers, system architects, analysts, product owners… they all know their domain best and should be included in creating requirements.

For this, a cohesive brainstorming session is needed to answer key questions like;

Compared to managing the quantity of test data created and subsequently confirmed, each of these activities is relatively easy. Methods for verifying test data may be challenging and make or break an API and application’s testing process. API testing automation can be useful here.

API testing is becoming a tough notion in the software and QA testing chain when it comes to verifying the software or an application. If you face any difficulty in getting assured execution, then speak to QA experts at Peerbits.

We work to improve our platform and procedures to elevate the testing experience to an altogether new level, providing a greater degree of client satisfaction.

At Peerbits, we provide a range of testing services as a part of full-fledged mobile app development services and a standalone service. Our expert QA team performs test case-based testing.

It provides a baseline that employs a multi-execution channel strategy to get real pass/fail results via AI Automation, manual testing, and crowdsourcing.

The Role of DevOps in Digital Transformation